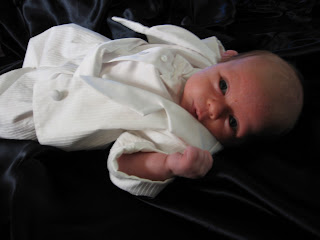 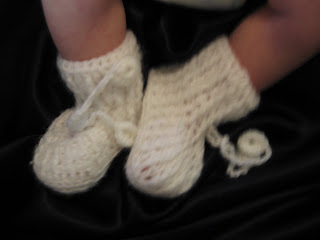 This is Seth in his blessing outfit. I took it at home a couple days after he was blessed. I thought this one was exceptionally cute. He looks like he's trying to pose for abercrombie. lol! The second one is just his booties that he got from great grandma rasmussen. They're way cute on him. 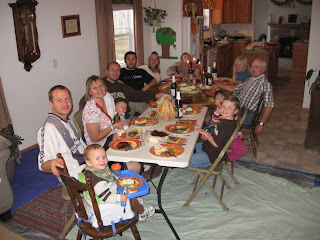 Then there's everyone at thanksgiving. We're in my brother Zach's house in WY. We had a ton of fun! I made a nasty looking pumpkin cheesecake pie. It tasted better than it looked, thank goodness. 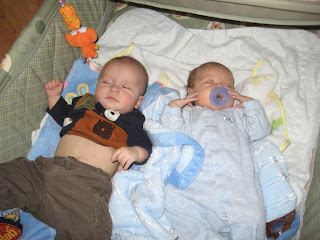 This one is Seth (right) and his cousin, Jayden (left), who is 3 months older than him taking a nap together in the bassinet of the pack 'n' play. These two little guys had a ton of fun together. We sat them in front of each other to see what they would do. I think Jayden was confused cuz Seth wasn't reaching for things or playing yet and Seth was in awe of this baby that could do so much. It was fun to get them together. 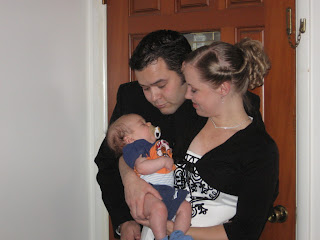 This is Jason and I all dressed up for the Omniture Christmas party. It was way fancy and we had a great time pretending to be rich for a night. (yeah, we even had a valet park our car. Who does that?) The butter knife couldn't cut the roll, but it was slicing through the steak like nothing. Yum! I even got that dress new from Mariposa's going out of business sale. (I didn't spend a lot on it. I don't spend hardly ever; It's hard for me.) 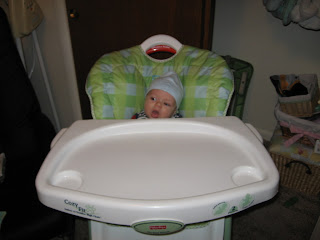 This was Seth's gift that was too big to take to WY with us so he opened it early. He's just tiny in it in this picture. It's the neatest high chair. It has infant head supports, lays back completely, the legs adjust to three different heights, and it has a really easy one hand release. I've used it a ton already, and I don't even feed him in it yet! 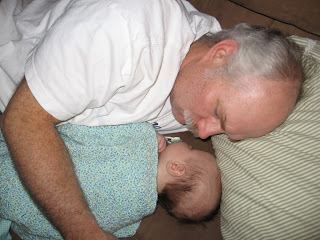 This one is just cute so I had to throw it up. (Grandpa "papa" Rasmussen and Seth) It was a good Christmas break... 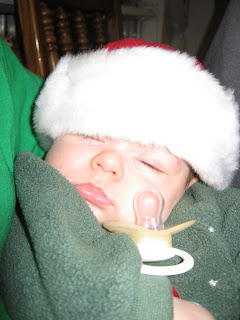 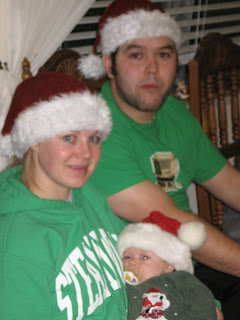 Us on Christmas Eve waiting to eat dinner. 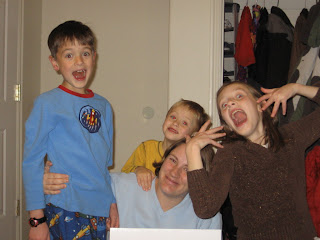 Happy New Year! This is Jason's brother Zac's family (Kristen, Matthew, Nathan, Michaela... Their other daughter, Adrienne, isn't in this picture.) We went to their house for New Years and had a great time eating a wonderful meal, playing games and watching "The Bucket List". It was a lot funner than Jason and I at home by ourselves. We hadn't seen their family for quite a while so it was fun to spend some time with them. 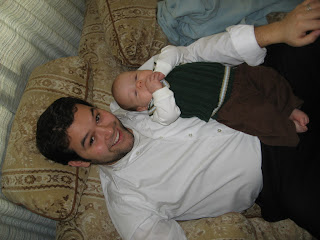 My two men looking slick! Aren't they handsome? I love showing them off! 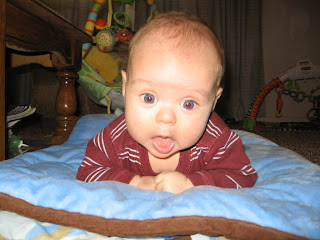 Seth doing tummy time which he HATES. He's doing a lot better though, so he whimpers less now.

I also had my birthday this month and turned 25. For my bday we went to Body Worlds and had a good time there. It was way interesting. Seth didn't like it much, but he made it through. We didn't do much on my actual birthday because it was a Sunday and also instead of doing presents we are taking a trip to Mexico later in the year. So Jason made me a crumb cake and I blew out my candle and Jason changed all the diapers for me. Happy Birthday! :)

Hey I'm glad you found me, your blog is cute and your little baby is even cuter! Congrats!