I know, I know. It was over a month ago... but there are so many other things that I've been trying to catch up on (like sleep, for one. haha...) that this has taken a back seat for way too long. So here's my sweet little baby that somehow grew up right before my eyes.

On Seth's actual birthday we rode the train at the Mall and he LOVED it. We got him off and he started crying so hard that Jason and I just laughed out of pure shock. The words, "I want ride choo choo!" escaped his lips more than once. The train conductor there calls Seth his "little buddy" because he sees us playing in the play area on a regular basis and Seth always waves every single time the train drives by. We also ate at a place with an actual trolley in the restaurant and pictures of trolleys all over the walls, so Seth was excited to eat dinner in a choo choo.

The Saturday after his birthday, we had a big ol' party for him at a wonderful pumpkin patch. He got to go in the petting zoo and pet goats, chickens, a donkey, sheep, pigs, bunnies, etc. It just goes on and on. At one point there were 3 sheep and 2 goats packed in to an area about the size of a child's play house and there was fearless Seth standing in the middle just patting them all and talking a mile a minute. 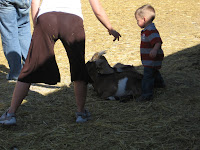 He also got to ride a pony and loved that also. I thought he might be afraid but he wasn't at all. He was really good to hang on too, which was a fear of mine since he will just bail from about any height sometimes. (He knows I would never let him fall.) 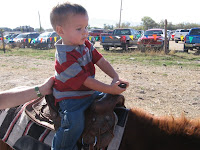 After that we went over to the table that Jason had set up for us. He did such a good job of making it look festive and inviting to a two year old. I'm not sure Seth would have stopped playing long enough to do cake, ice cream, and presents had Jason not put all that effort in to it. 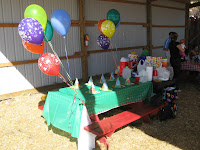 The cake and plates. (He had a jungle theme...) 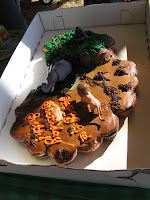 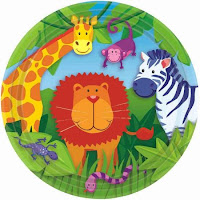 Then he opened presents with all his fun little guests. We had 4 children from the ward and their parents, Grandma and Grandpa Rasmussen, Aunt Alyssa, and Aunt Holly and her 4 children. They were all so much fun and we really appreciate all of those that showed up, ESPECIALLY those that traveled a long way to get there. I know it wasn't necessarily convenient or easy, but I hope it was worth it because we really enjoyed every single guest. 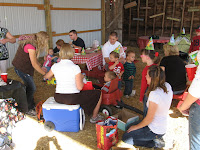 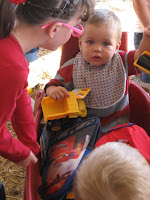 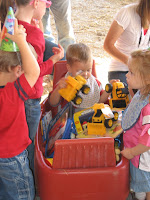 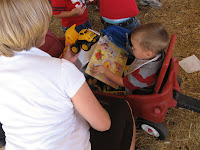 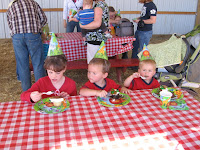 And the family that showed up... This is the best picture we could get of Seth. He hadn't napped all day and this was taken at the end of the day, so most pictures at this point didn't turn out perfectly. 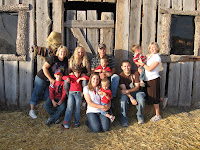 Seth got a lot of amazing gifts! He got puzzles, lots of cars and trucks, playdough (which he loves), some winter clothes, his toddler bed set (I had to teach Jason some quilting to get it how we wanted it. lol!), and (drum roll please...) a BIKE! He was so excited about all of it, but the bike especially. 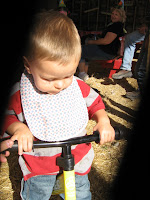 We went down a HUGE slide... 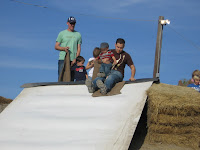 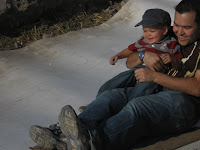 We rode an animal train (pulled by a 4-wheeler and decorated like animals...) 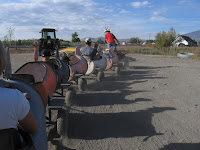 We played in a corn box (like a sand box but with corn kernels...) 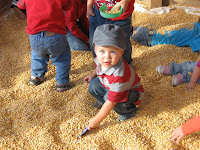 Everyone else went through a corn maze (while I sat down for a second. My pregnant legs couldn't take all the walking.) 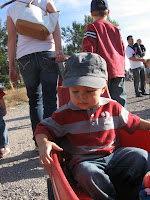 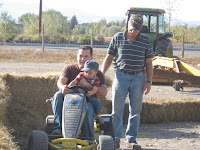 And we did so much more. I know this has been long, but there is so much more to write. I don't think I can even convey how wonderful this party was. Seth loved every moment and fell asleep on his pumpkin on the way home. (I have the CUTEST picture of it, but it's on Jason's phone, so I will have to add it later...)
Posted by Ashley at 7:37 PM